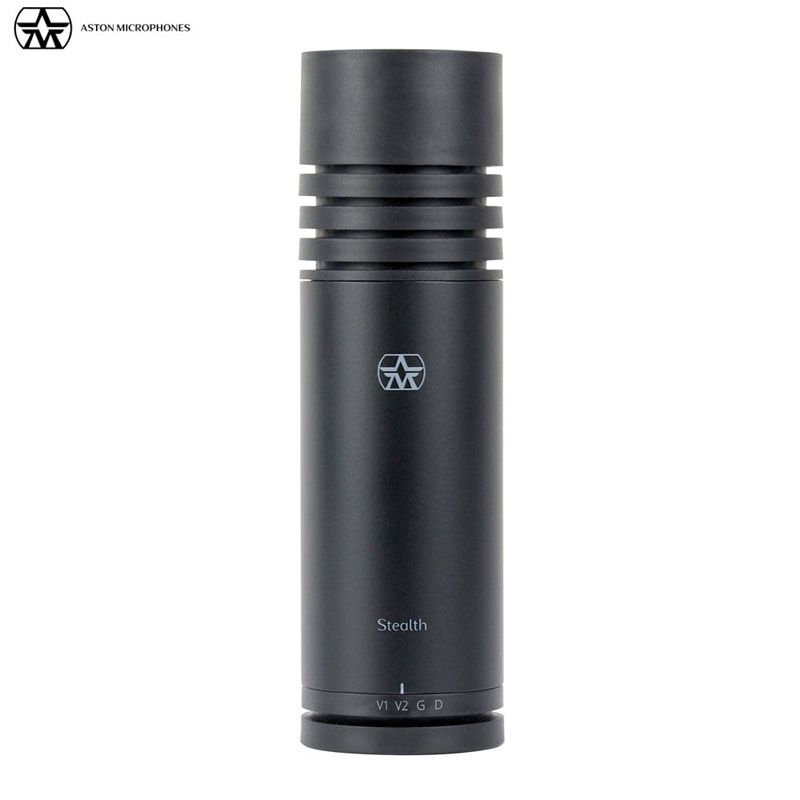 The Aston Stealth is a revolutionary broadcast quality microphone for studio and stage, with 4 switchable voices delivering unparalleled performance in almost any situation.

Stealth is the world’s first microphone with an autodetect function which senses 48V phantom power and automatically switches the mic to active mode. A built-in, high quality, Class A Mic Preamp dispenses with the need for an external gain lifting device in active mode. Stealth also features a unique Sorbothane internal shock mount system and Aston’s legendary build quality. With so many cutting-edge features and being suitable for almost every conceivable application, we believe Stealth is the world’s most versatile microphone.

Stealth was developed in partnership with more than 90 top engineers, producers and artists on the Aston 33 development panel who participated in a series of blind listening tests designed to create the best possible sound. The resulting four voice settings, Vocal 1, Vocal 2, Guitar and Dark, offer an unprecedented variety of world class sounds to suit almost every application.

The Aston Stealth is a cardioid, end-fire microphone for use on stage or in the studio, from VO, to gaming, live sound to serious high-end recording.

With some of the biggest advances in mic technology in decades, conceived and designed from the ground-up, Stealth is the world’s most versatile microphone. Boasting settings for four separate voices, each one rigorously tested to deliver unparalleled performance across a wide range of applications, Stealth also introduces a host of innovative technological features offering significant improvements over traditional mic designs.

Think of Stealth as four professional microphones in one. Each setting has been voiced by a panel of more than 90 top flight audio engineers and producers on the Aston 33 panel through a series of double-blind listening tests, beating not only every mic in its class, but some far more expensive ‘industry standard’ mics.

There are 2 vocal settings, optimised for different vocal textures, a guitar setting which is equally suited to Spanish guitar, Electric guitar cab and steel string acoustic, and a dark, vintage setting, reminiscent of classic ribbon mics.

Mics which apply ‘flattering’ - but destructive - pre EQ make professional post-processing almost impossible. Stealth, however, provides a choice of four pure, high quality signal paths. The voice settings are not EQ filters, they are contour networks, meaning the bulk of the signal does not pass through any sort of filter circuitry. The whole signal is slightly attenuated, with some frequencies being added back in at a higher level. This results in much lower phase distortion than conventional filter designs.

Stealth works with or without 48V phantom power. In passive mode (unpowered) the active circuit is completely bypassed and Stealth operates with the simplest possible signal chain to give a beautifully clean sound.

A unique (world’s first!) built-in Autodetect function senses the presence of 48V phantom power and will automatically switch the mic to active mode to utilise the onboard class A mic Pre.

When in active mode Stealth features a high-quality built-in Class A Mic Pre, dispensing with the need for an expensive external gain lifting device.

Aston Stealth includes a proprietary internal shock mount design with the capsule suspended in mid-air, completely isolated from the mic chassis, and supported at 3 points by Sorbothane polymer hemi-spheres.

Sorbothane is a synthetic viscoelastic urethane polymer used as a vibration damper and acoustic shield used in computing, hi-fi and many industrial applications.

Stealth’s capsule is fully enclosed in a Stainless-Steel Faraday cage - an enclosure used to block electromagnetic fields (named after the English scientist Michael Faraday, who invented them in 1836).

A Faraday cage operates because an external electrical field causes the electric charges within the cage's conducting material to be distributed such that they cancel the field's effect in the cage's interior. This phenomenon is used to protect sensitive electronic equipment from external radio frequency interference (RFI).

Of course, if you ever get stuck for a teabag it can double up on duty for a good brew!

Like all Aston microphones, Stealth is built for work. Proprietary manufacturing techniques and the use of novel materials have created a near-indestructible microphone, equally at home in the most demanding of recording environments, or with the rigours of life on the road.

The chassis is constructed from extruded aluminium and finished with a sleek, ‘soft-feel’ urethane-acrylic coating.

The four voices are accessed via a discreet, flush-aligned rotary switch which cannot be accidentally moved during performance or in transit.

Stealth’s phantom power mode is indicated by the soft glow of Aston purple LED floodlights. These can be switched off when the mic is to be heard but not seen, for example in broadcast and video environments.

Yet another unique design element of the Aston Stealth is the use of custom moulded end caps with integrated XLR and a special design quick release stand mount. An included stand mount allows you to simply click the mic into place and release it just as quickly for storage, plus it allows you to angle the mic perfectly for any application.

We have put our hearts and minds into creating the most beautiful performance pieces possible with each Aston product. When it comes to packaging we believe simplicity is king. Protective, re-useable, environmentally sensible packaging that doesn’t cost the earth.

The Aston 33 – the blind-testing process

The Aston 33 (so named after the original members) is now a panel of more than 120 top producers, engineers and artists who work with Aston on new product development to ensure every mic is best in class before it is released to the market, 92 of whom worked directly on the development of Stealth.

They perform double-blind listening tests on a range of possible versions of each new mic, plus ‘industry standard’ models from key manufacturers and vote on performance on a variety of sources (vocals, guitars and so on). In tests the panel do not know which mics they are listening to or even which are included in the tests, so the resultant votes can’t be biased by brand reputation, or an expectation of how a certain microphone should sound.

Some surprising results arose from the Stealth project testing. For example, the prototype Stealth voicing that consistently came top in the voting for female vocal takes came off worst for male vocals and vice versa, regardless of the pitch of the singer! Furthermore, a different voicing came top for ALL guitar sources, from finger picked acoustic through to mic’d up distorted guitar cabs.

These discoveries, derived from more than 9000 data points, were the catalyst for the Aston team to set about reimagining the microphone from the ground up. Stealth is not a jack of all trades, it truly excels at capturing professional quality audio in almost every situation, and masters them all.

* Varies across the 4 voices